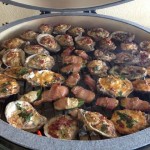 Oyster's Rockefeller - Big Green Egg
Have you ever had Oysters Rockefeller that were raw underneath and topped with a burnt crust of cheese? Or how about St. Louis style Oysters that were simply a dried-out flavorless mess? Well, I think I've nailed it with the Big Green Egg!! These are BY FAR the best oysters I've ever had! Cooking at around 320 for 30 minutes seemed to be perfect.
Ingredients
Servings:
Instructions
Posted in Grill Food.